Host states gear up to work on FCC 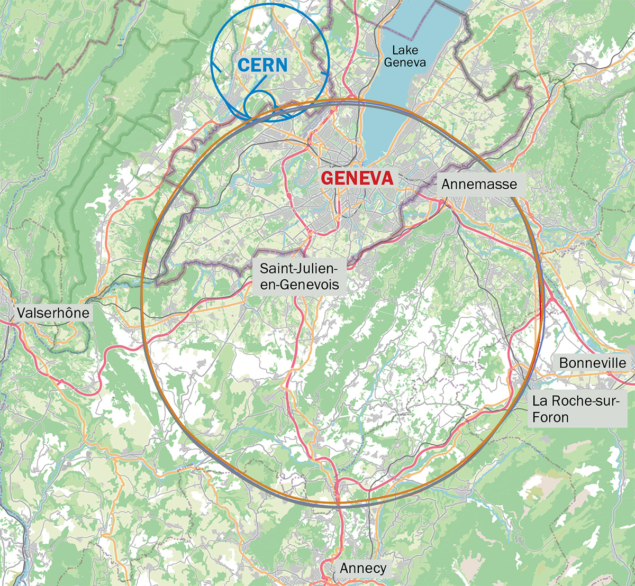 In preparing the long-term future of high-energy physics after the LHC, the 2020 update of the European strategy for particle physics recommended that Europe, together with its international partners, explore the technical and financial feasibility of a future proton–proton collider at CERN with a centre-of-mass energy of at least 100 TeV, and with an electron–positron Higgs and electroweak factory as a possible first stage. In 2021 a new chapter opened for the Future Circular Collider (FCC) feasibility study with the development of the preferred layout and placement scenario for this visionary possible new research infrastructure.

Following the publication of the FCC conceptual design report in 2019, an interdisciplinary team from CERN and CERN’s host-state authorities worked to ensure that the preferred placement scenario aligned with the regional requirements and environmental constraints in France and Switzerland. This included Cerema (the Centre for Studies and Expertise on Risks, the Environment, Mobility and Urban Planning) in France and departments from the Canton of Geneva. A key challenge in constructing a new 90–100 km-circumference tunnel for a future collider concerns subsurface areas. Here, the FCC study has brought together international leaders in the construction industry along with French and Swiss universities, thus profiting from local expertise, to develop geological studies. Thanks to this colossal effort, more than 100 scenarios with different layout geometries and surface sites have been analysed, leading to a number of potential options.

In June 2021 an international committee independently reviewed the results of these studies, recommending a specific, 91 km-circumference layout with a four-fold symmetry and eight surface sites (see “Closing the loop” image). This configuration balances the requirement for maximising the scientific output of the FCC within territorial constraints and project implementation risks. To validate the feasibility of this placement scenario, further data about the surface and the geology are needed. This entails specific site investigations to optimise the locations of surface sites in view of infrastructure and environmental constraints, and to gain a more realistic understanding of the geological conditions.

In line with these planned activities, the Préfet de la Région Auvergne-Rhône-Alpes has been mandated by the French government to coordinate the involvement of all relevant services in France in close cooperation with Switzerland, and the local authorities and communities potentially affected by such a project. A few weeks later, on 10 December, the Swiss Federal Council announced its decision to strengthen support for current CERN projects and future developments, including the FCC: “In addition to its considerable contributions to science and innovation, CERN has also brought significant economic benefits to Switzerland, and the Geneva region in particular,” stated the Federal Council announcement. “Switzerland must promote CERN’s long-term development potential, particularly in terms of spatial planning, which has prompted the Federal Council to initiate work on a federal sectorial plan focusing on CERN projects.”

In parallel with activities at the federal level, the Canton of Geneva has created a support unit involving about 20 different offices to work with CERN. The first meeting between the newly established group and the CERN FCC team took place in December 2021, paving the way for a roadmap of activities from 2022 onwards to analyse the FCC requirements and the constraints that will apply during the different project phases.

As the FCC feasibility study moves from a generic to a specific geographical level, dialogues between government officials, local elected representatives and citizens become increasingly important. Consequently, CERN – together with France and Switzerland – has created a permanent group to communicate with all stakeholders in both countries. The first activities involve identifying and analysing the needs and expectations of the populations in the relevant areas, and preparing non-invasive activities on the surface, such as environmental analyses and detailed planning of geophysical and geotechnical investigations to be carried out from 2024.

Developing a scenario for such a geographically distributed infrastructure raises numerous challenges at both large and small scales, and therefore calls for thoughtful planning. One example is the connection of surface sites to the French high-capacity electrical network, which involves planning for electricity lines with voltages above 63 kV. A second example is the connection between selected surface sites and the transport network to allow the efficient removal of excavated materials and the movement of construction materials. At the local level, one of the issues that working groups in France and Switzerland face is the provision of land plots. Since the launch of the FCC study in 2014, no less than 400 ha of candidate surface-site areas had to be discarded due to the designation of new environmental protection zones, agricultural protection areas and the development of housing and infrastructure projects.

Despite the long time scales involved, the local population should already be engaged from the feasibility study stage in developing the vision for CERN’s post-LHC future. This year, a series of meetings will take place with the communes that would potentially host the surface sites in both France and Switzerland. The activity will be accompanied by an environmental initial-state analysis and an agricultural-economics study, which will create the baselines for impact studies. These, in turn, will form the cornerstone of the Éviter-réduire-compenser (avoid-reduce-compensate) principle, anchored in French environmental law, which the FCC study has adopted from the beginning to ensure a well-balanced, scientifically excellent and territorially acceptable project scenario. A further issue that should be carefully explored is the accessibility of the surface sites; certain candidate areas are in zones that lack road or train access, for example. It is also important for regional administration services in France and Switzerland to establish contacts for FCC-related trans-border traffic in time to understand the needs and the possibilities on a time frame of 10–15 years.

These recent developments offer a glimpse of the ongoing work needed to prepare for a new research infrastructure in the Geneva region, and highlight the importance of the timely completion of a geo-localised scenario on a timescale of around a decade. In parallel, machine, detector and physics studies by the global FCC collaboration continue across 150 institutes in 30 countries.

It takes time and care to build a mutual understanding of the possibilities and constraints, both within the engineering domains at CERN and the public administration services in France and Switzerland, along with the development of the required legal and administrative frameworks. Tripartite working-group meetings involving CERN, representatives of the Canton of Geneva and representatives of the Auvergne-Rhône-Alpes region are now taking place on a regular basis.

Clearly, the strong support and cooperation of public administration services in both host states is a reassuring condition for the next steps of the FCC feasibility analysis. The recent FCC physics workshop reaffirms the interest of the physics community in the long-term scientific research programme offered by this future endeavour. The commitment of the community is the precondition for continued efforts to develop the FCC project scenario with an extended group of regional and local stakeholders.

The article was originally published in CERN's Courier (02 May 2022) and the link to the original article can be found here: https://cerncourier.com/a/host-states-gear-up-to-work-on-fcc/